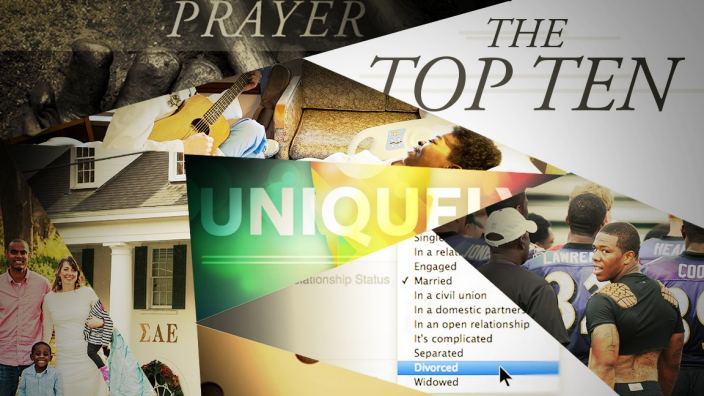 This year we’ve been called to action, made to think, and been inspired by the stories on Cru.org. Read an update to the top 10 stories of 2014.

Why is prayer so hard?

The reason this article resonated with so many readers is because it acknowledged a widespread struggle for believers. Sometimes simply bringing light to why we struggle with something helps us begin to identify how we can overcome it. Taking a moment to say together “Yes, prayer is hard, but let’s work through it together” made this article really stand out.

Since publishing Dr. Chris Peoples' story he has continued to explore the ministry of using worship within medicine. Chris is now engaged to Arianne, a Physician's Assistant, and they plan to marry this coming summer. Chris is nearing the end of his final year of his residency program. He recently met with the Hospital Administration at Methodist Le Bonheur Hospital, the setting for much of his story, to present his desire to develop his worship ministry further. The hospital has given him the green light. Chris continues to long for the day when praise and worship would fill hospitals and medical clinics throughout the country.

Pre-cancer: Susie’s journey of doubt before a brain tumor

The author wrote this story after hearing Ben and Susie's story and found himself wondering how God was working through people who had cancer. Although Ben and Susie thought they were headed to Brazil, God directed them to Africa instead. They have lived overseas since July 2014 and ask for continued prayers during their transition.

Does your personality type affect the way you evangelize?

The author wrote this story because he was interested in showing others that God created them uniquely. Christians have a Biblical call to tell others about Jesus. For some, this can be right in the sweet-spot of their personality and gifting, and for others it can be a great challenge. This article encourages people to take their personality and gifting and apply it to the way they tell others about Jesus.

Would Jesus have joined a fraternity?

Through people reaching out to Isaac following the article, he has had the opportunity to consult with staff and students in launching 10 new Greek movements around the country. Isaac hopes to launch more in 2015. He has also had students email him after reading the article, saying they decided to stay in their chapters realizing God has placed them there as a witness for Him.

How men should respond to the NFL crisis

For many men, the string of domestic abuse problems plaguing the NFL this year caused them to question “As an NFL fan, what do I do now?” Former pro Jeff Kemp addressed the issue from a standpoint of what it means to be a man by the Bible’s definition, and what Christian men can do to step up as leaders.

7 steps to improve your Bible study

This method of Bible study has made a big difference for the author. Now, when she sits down to read through a passage of Scripture, she has the tools needed to do more than just understand words on a page. This outline has helped her dig deeper and glean more about who God is and who she is in relationship to Him. It has helped her see familiar passages with new eyes, and we hope it did for you as well.

This Halloween, Turn the Lights On

Halloween is a perfect opportunity to connect with people and share the gospel, but it can get lost in the shuffle of our busy schedules. This story follows a couple who created a holiday corn hole game with treats set up outside their home. Parents chatted while watching their trick-or-treaters play for candy. Not only was this a successful Halloween event, but it created space for relationships to grow. It was a great reminder for Christians to slow down and create margin in our lives so we can respond to natural opportunities to love our neighbors.

It’s ironic that social media can just as easily divide a relationship as it can deepen it. For a relationship to thrive, it needs intentionality and thoughtfulness, especially in marriage. The purpose of the article was to remind Christ followers that Scriptural principles are a reliable standard – even when it comes to social media – for how to build relationships, not undermine them.

A radical call to pray for ISIS

Praying for enemies is hard, even impossible, without God’s leading. Over the past weeks, the author began praying for ISIS, but felt it become mechanical. Pray for the specific needs and barriers an ISIS soldier might have to encountering Jesus, and ask God to enable you to extend radical forgiveness in your everyday life. Easier said than done right?

What Others Are Saying About GCMG

What really happened at Explo ‘72

Latest Stories in What We Do

As we say goodbye to 2017, we wanted to highlight some of Cru’s most popular articles this year. From what we can see, you have a heart for the Lord and for the people around you.

What really happened at Explo ‘72

The movie Woodlawn references Explo ‘72, a Cru event that happened at the height of the Jesus Movement.